Senator Michael Testa blasted Rutgers University for forcing overburdened students and New Jersey taxpayers to pick up the tab for a $73 million deficit after spending on athletics reached a record high of $118 million during the COVID-19 pandemic.

“Once again, taxpayers’ hard-earned dollars are being wasted to pay for Rutgers’ costly and highly publicized financial woes,” said Testa (R-1). “Here we have an athletics department that spends so much money, it rang up a $73 million deficit for the second consecutive year while increasing overall spending to an all-time high. Adding insult to injury, all of this irresponsible spending occurred during a time when so many New Jerseyans and our small businesses were suffering financially.”

According to the NCAA, Rutgers athletics received more university support during 2020-21 than any other public university in a major conference. Direct subsidies and state aid reached nearly $43 million but, athletics still found a way to create a shortfall of more than $30 million. During this time, coaching salaries continued to rise, increasing to $25.5 million.

During the last fiscal year, which occurred during the COVID-19 pandemic, athletics spending reached an all-time high of $118 million. In total, Rutgers athletics has racked up $265 million in overall debt.

“Rutgers is first and foremost an academic institution which must stay focused on preparing all of its students toward a prosperous future, not saddled with debt,” said Testa. “Athletic successes should be about fond memories carried forward, not a bloated loan bill which exists long after the cheers fade.”

“Everyone—especially State officials—must bear in mind the outrageous cost and scope of this scandal the next time Rutgers comes mortarboard in hand to request more taxpayer dollars or announces that tuition and fees are again on the rise,” added Testa. “Permitting such reckless financial behavior is an extreme disservice to all New Jerseyans both now and for our future.” 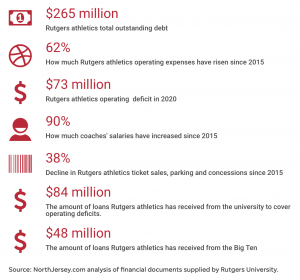